I made an alphabet. A photo alphabet. After an amble in the area in the afternoon. I downloaded the photos… and alphabet possibilities tumbled out:
b for blackbird, d for daffodil, e for evergreen, f for fungus….

A relevant alphabet. Meaningful. To me anyway.

And so to the classroom… Imagine the relevance of alphabet cards and alphabet books that you and the children make together – for use in your classroom.

A friend emailed about a few children who struggle with letters and sounds. To help solve this problem, she has the children take the photos to make a class alphabet book (with her help). What a great idea!

She says, “On top of what I’m already doing, I’ll get these children to take photos to create our own class alphabet book.  It will be their project to present to the class.  I work with them for…  to create it and share it, then most importantly constantly refer back to it when they are struggling with the sounds.”

Such a group-made alphabet book is relevant to the children. Personal. Meaningful. About the children. Their classroom. Their school. Their community.

I’ve done this with children in two ways: drawings and digital photos.  After discussion, the children draw pictures to represent the letter, e.g. z for zucchini in a vegetable alphabet book; c for crocodile on animal alphabet cards. At other times, children suggest an object for each letter and I take the photos, e.g. c for computer, d for door, p for pencil.

Once, a six year old made A Car Alphabet by drawing a car with the name for each letter, A a for Alfa Romeo, B b for Buick, C c for Cadillac…. Guess what his main interest was at the time!

Early childhood classrooms usually have alphabet cards. These are on a word wall with additional word cards that the children use in their writing. 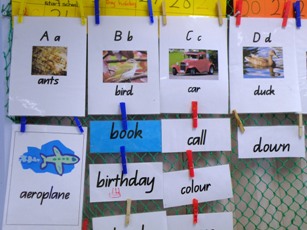 Alphabet cards as part of a word wall

Early childhood classrooms have alphabet cards for children to use when learning letter formations and phonics. These are beneath the whiteboard for proximity to the children – not above the board and out of reach.

A low alphabet for children to trace and touch

And of course, every classroom needs a basket of Alphabet Books.

Store alphabet books together for convenience

Have you made class alphabet books? How?

‘S’ for Saturday and Squirrel